The History of "A Demon In Love"

"A Demon in Love" is a short animated film, that aims to take the fairytale-like moment of "love at first sight" and add some cartoony wackiness into it.

Inspiration is a funny thing! Some stories stick in your head and they have a weird way to sneak up on you! The script started out as an illustration, then was turned into a song and, finally, became an animated film.

Confusing? Perhaps, I can elaborate. This is the how the story goes:

1998... I am taking drawing classes to get ready for university. One night, after the class, one of my fellow students, and close friends, comes up to me and hands me an illustration he drew. He was into Fantasy art and his illustration had an angel kneeling in front of a dead demon, with a screaming Devil above them. The story, as he said it, is that the dead Demon fell in love with the Angel, which practically made him good and therefore had to be punished by the Lord of Demons... the Devil himself. Interesting story for fantasy art! Not my cup of tea, but I accepted the gift. Unfortunatelly, I don't still have the illustration. It is somewhere in one of my crates of old drawings.

1999... A year had passed and I am also in a band now! Singer and guitarist. One night, we were jamming a bit with the keyboardist. I started improvising something... and my mate turns to me and says "This sounds like an epic rock!". Really? So when I went home, I wrote a song! I had no idea what epic rock ballads talk about so I used the story from the illustration. I only changed the ending. The demon that fell in love with the Angel, essentially turned good, therefore a new Angel had to be born. I was weirder back then, I suppose. To my mind I was parodying how some genres take themselves more seriously than they should, with all their pseudo-symbolisms and deeper poetic meanings! Of course, it was a terrible song and I hated it so much I never played it again!

2002... I am at university and we are asked to do a short animation film. I was studying old animation shorts at the time and I really liked Tex Avery's shorts. You know the ones with a wolf always flirting with a beautiful damme!
Trying to find a story for my project, and liking the Avery's wolf so much, I knew I wanted a love-at-first-sight story. After a few ideas, I ended up in something that kind of resembled the song's story! So I scratched it all up and ended up with Demons and Angels again. But, twisted the ending again, making the Angel being another Demon all along! So... this time love doesn't triumph over hatred, as the bad Demon was defeated by an even worse Demon! 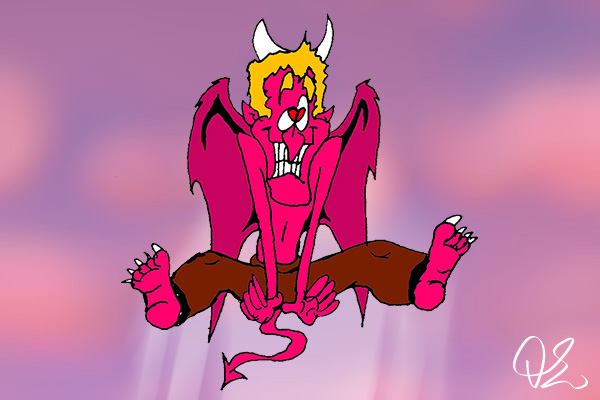 The story was silly! And I wanted the soundtrack to be as silly and ridiculous as well. I composed a very childish and cheerful melody and played it as an epic rock ballad. Of course, at uni, I didn't have all my sound recording equipment, just my guitar and a pc full of plug-ins. I also couldn't find any decent sound-effects on-line. I didn't know where to look back then. So I did them all by mouth!

It went well... My tutors were happy and I got a very good grade.

Line-Test for the "love at first sight" scene, from the original film.

2016... The years passed and I have been meaning for a while, to remake another project from the 2002 era. "The Life of Death". As I was researching my old files, I came across "a Demon in love" folder. Just to get myself in the mood, I started reworking a scene from that... and ended up doing the whole thing again.

Dog-whistiling animation, from the remake.

This time, I asked my friend, the very talented composer Christos Maragoudakis, to compose proper music for the film. I only gave him two restrictions: The melody should be ridiculous but played hard. It had to have a pause, when the Demon's heart break. He did none of those! But, it was fantastic! As always! And fitted the film perfectly! 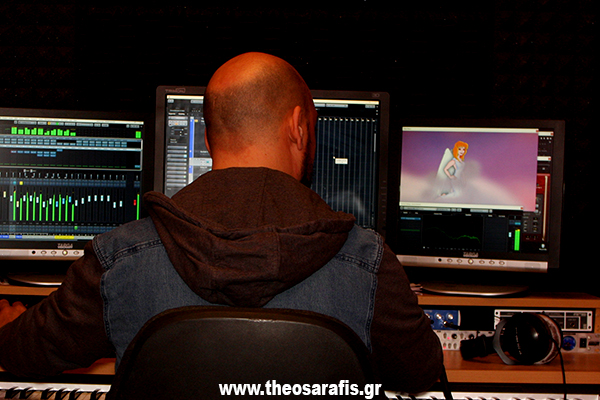 And that was it! An illustration that became a song - that was turned into a script, which produced a university project, which inspired an animated short film.